A Bliss Track for Steve Pettit

Steve is Dev Night's resident master of 3D and obscure references and an all-around great guy. As terrified as I was to perform this, writing the lyrics and the beat was nothing but fun.

As random as some of the lyrics seem, they all refer to real things. Steve did make a game where you pick up a person and point them at a Kinect. He did make a game with gloriously animated Patrick Swayze hair. 'Damon Morgul Sadria' is ominously scrawled across the wall in the basement where he plays bass. It's all true.

The Steve samples were recorded clandestinely during a single conversation. Dude covers a lot of ground.

The guitar-y samples are from the Screaming Females' "It All Means Nothing". They're an amazing band and significant to this because Steve's a big fan and turned me on to them.

The Bliss Track is a Dev Night tradition where one person writes and performs a complimentary rap about someone else, and then that person does it next.

Came up through Newgrounds via Drexel

To master the vertex, the pixel and the texel

He shows taste when he says rush is overrated

Millenium Falcon hanging from the ceiling

Flyers sweatshirt cause you know he's got feelings

He'll bend over backwards so his students don't flunk out

But don't give a damn riding bikes with his junk out

You can toe tap to this flow I rap

But save the slow clap for the mo cap

He's capping motion like the wind white caps the ocean

And less than 3D is a foolish notion

What wizard can capture motion anyway

Conservation of momentum cast aside like a trump toupee

You're wrong-headed if you don't give Steve full credit

Should be beheaded if you cut Steve Pettit in the edit

Where you headed steve pettit

I don't know but I know that you won't stop

When it's time to roll the credits

I know Steve Pettit will be at the top

Brushing her teeth with noodles cause that's what dad's do

Rachel Stine is on his mind with her neon kung fu

Warming hearts on the scene with their dev night romance

Thinking you deserve respect cause your game jam was correct

Trying to beat him is like boxing with Shiva

Four fists flying in sync with the beat

It went on his back in a case to the basement

Where steve straps it on like a bowcaster, son

And then the thunder rumbles forth like the prophecied end times

Rachel, forgive me cause this is just a show

Where's your head at if you leave Steve Pettit unwedded

Just don't get it if you leave Steve Pettit unbedded

Where you headed Steve Pettit

I don't know but I know that you won't stop

When it's time to roll the credits

I know steve pettit will be at the top

Come and get it Steve Pettit

To this godforsaken mic I bid adieu

And don't forget it Steve Pettit

Like a case of ghonnorhea this is my gift to you 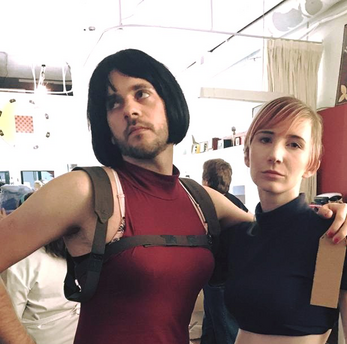